What are we up to with Transeuropa Caravans?

From 25th of April to May 4th – with the exception of the Southern Caravan which leaves from May 2nd to May 10th – Transeuropa Caravans will leave six cities and travel towards another city, passing through more than 30 spots identified in the previous research and mapping phase. The transnational caravans’ teams made up of a coordinator, a communication and a logistics officers, a video-maker and a cartoonist will engage with people involved on the ground in political struggles or initiatives for democracy, solidarity and equality, on topics ranging from the defence of minorities’ rights to the environment, the fight for common goods or the resistance to the power of financial markets… Often these grass roots initiatives are taking place locally but gather knowledge and information that ought to be spread across Europe and be connected to similar initiatives at the other corner of the continent. This journey is a way of connecting all of these initiatives amplifying their voices through the platform we – European Alternatives – provide and through the engagement in the next edition of the Citizens Manifesto and subsequent presentations.

Our aim with this tour is hence to deepen the interaction with the Citizens Manifesto and its policy proposals, discussing and finding concrete ways of putting proposals into action. Along the route, we will also engage MEPs and candidates into this process to bridge the connection to decision makers and those closer to policy making in Brussels. It is a both a political and playful journey organised a long a series of participatory activities and artistic public interventions inviting people to take part and ensure a wide European audience is involved in the trip offline and online through this interactive website.

Our journey so far 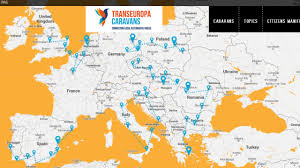 European Alternatives has worked during three years to facilitate dialogue and contact between diverse groups of people living in Europe. Through the use of citizens’ panels, we have encountered large groups of people, including migrants, Roma people, LGBT people, unemployed or precarious young people and many EU citizens living in Members States they are not citizens of. Their concerns and proposals have been gathered in the Citizens Manifesto that was published in 2013 and presented to the public for the first time in Berlin in October 2013 as well as the European Parliament in December 2013. This idea of a pan-European dialogue of citizens that emerged from this process of the Citizens Pact is now taken to a different level: we leverage on the experience of drafting the Citizens Manifesto to produce tangible impact ahead of one of the key moments in European politics, the elections for the European Parliament in May 2014.

[EN]
We're building a ceramic model of the neighbourhood. Decide with us wich shape it should take - in only 8 minutes!

About P U M