Smal Initiatives for the European Quarter. From MAP-it to PUM

Derelict sites, overgrown land and empty spaces can be found in every city. They stir the imagination and are an invitation to positive action. That is also what makes them prime locations for temporary or collective projects to emerge – gardens, petanque-courts, skate-parks, open-air cinema’s, you name it. From the first stroke of a spade it is clear however, that revitalising these spaces takes more than enthusiasm and a good idea. Is the land in public or private ownership? Why was it abandoned? Are there development plans for the site?… Dealing with these questions requires quite a bit of motivation and negotiation of red-tape, but whether for fun or conviction, people keep finding it worthwhile to take on derelict sites in their cities.
In November 2010, City Mine(d) [www.citymined.org] gathered one hundred people from nineteen European cities who all agree on this very subject. The theme of their meeting was the ‘how and why’ of small initiatives, and its ‘headquarters’ were in Brussels’ European Quarter. Most visitors were familiar with the mix of levels of government in their own local area – from neighbourhood council to metropolitan, regional and national government – but exceptionally in the European Quarter, the European Institutions are also a local field actor.
Much to the surprise of the visitors, ‘real people’ are living and taking initiative in the abstract ‘Brussels’ of European Institutions. MAP-it [see frame 2 for more details], an interactive toolkit to facilitate discussion and ideas, was used to identify small interventions, as well as locations for such interventions, that could be a positive contribution to the neighbourhood. The exercise was jointly made by creative visitors and people with local knowledge. For local participants (local residents, European civil servants, artists, neighbourhood groups) the first MAP-it workshop provided the motivation to realise some of the project-ideas and possible collaborations. [see frame 1 and the map of
MAP-it European Quarter session #1 for more details]
From the original group, those most eager to continue chose ‘PUM’ or ‘Projet/participation Urbain/urgent Maalbeek’ as their common name, focussing on one particular site, the abandoned land called Eggevoort (see frame 3 for more details). Together they catalysed a sense of initiative emerging from the different MAP-it workshops. On and around Eggevoort a bulletin board has been put up to give voice to local knowledge (history, hydrology, activities); Polaroid Salons have been used to initiate meeting and exchange between neighbours and passers-by; a water pump workshop explores interaction with water in the neighbourhood; poetry is distributed; vertical gardens are created,… [see the MAP-it European Quarter Summary map for more details]
Two themes have emerged repeatedly throughout this whole process in the European Quarter: water in the city and participation in urban development. In 2012, backed by a wide variety of old and new initiatives PUM began laying out a Water Garden, experimenting with better ways to deal with water in the city. As part of New Urban Rivers, PUM also collects technical and scientific knowledge about water management in the nearby Leopold Park. Furthermore, the activities create a dialogue with different local authorities and challenge them to shape the city in a more inclusive and fair way.

PROCESS OF THE WORKSHOPS
By means of an introduction and as a way to build upon a shared ‘real life’ experience, participants watch a short film1 about the neighbourhood and go for a walk through the neighbourhood. A member of the neighbourhood committee Association du Quartier Léopold [www.quartier-europeen.eu] leads this guided tour to initiate people in its local history and political and urban planning issues. The aim of the following MAP-it discussion is to come up with concrete proposals to improve the public space around the Leopold Park.
Equipped with a surface map of the European Parliament and the Leopold Park, stickers (both with icons and with empty fields) and a predetermined scenario, small groups of about 7 participants start the discussion. A moderator for each group keeps track of time and follows the scenario. Participants get sticker sheets (a different colour for each group), with logo’s and pictograms to answer each question on the map. Empty stickers allow for some leeway and for taking an occasional side step.
First of all the ‘traffic lights’ are introduced. On an outline map of the neighbourhood all participants indicate the places he/she likes (green light), dislikes (red light), or
1 I Love EU – short film made by collectif Plus-Tôt-Te-Laat [PTTL] for PleinOPENair 2010, focussing on the security issues in the areas surrounding the buildings of the European Institutionsplaces that strike him/her potential for action or barriers that need to be overcome (amber light). Building upon this analysis, participants use their ‘goal’-stickers to identify 3 possible tracks to improve the neighbourhood. The most targeted ‘goal’ receives a ‘frame’-sticker. For this zone each group is invited to come up with new projects, actions or interventions explained by means of ‘person’ – and ‘action’-stickers.
To allow for a debate around the conclusions of each group, one ‘presenter’ (not the moderator) per group takes the map with stickers in their particular colour to another group table. The second group amends the first groups’ map with ‘bomb’, ‘padlock’ or ‘danger’-stickers in their own colour, in order either to second their analyses and proposals, to give constructive criticism or to add additional information. The workshops results in three maps. On of these maps can be found in this folder. The other maps can be consulted on http://www.map-it.be/mapping-reports/mapping-brussels-urban-platform
Session #1 – 21 November 2010 – Urban Platform, international meeting organised by City Mine(d) – 25 participants
Session #2 – 2 March 2011 – meeting with local participants –
CC Espace Senghor – 27 participants
Session #3 – 21 June 2011 – analysis of the New Urban Rivers concept, organised by States General of Water in Brussels – Museum of Natural Sciences – 22 participants
Session #4 – 27 June 2011 – meeting with staff of the European Institutions – Liaison Office Brussels-Europe – 24 participants

1
MAP-it EUROPEAN QUARTER:
CONTENT AND RESULTS – AN OVERVIEW
MAP-it European Quarter focusses on the urban area between Matonge (N), Jourdan (S), Chaussée de Wavre (W) and rue Belliard (E) with place Luxembourg, the European Parliament and the Leopold Park at its heart.
After the first two MAP-it European Quarter sessions, the most important conclusion was that socially, functionally and aesthetically, the European Parliament and its adjacent buildings stand completely isolated from the rest of the neighbourhood. Security measures imposed by the European Institutions play a key structuring role which effects the surrounding public space and the siting of buildings. Its mono-functional character – empty and desolate in the evening – reflects badly upon the neighbourhood and creates physical barriers between the different parts of the area, leading to a severe lack of social public space.
Several ideas have been raised to bridge this gap and to create new spaces for meeting and play. Temporary installations and arts interventions have been proposed to give the area a more informal character and to make it livelier. The high density and diversity of Matonge and Jourdan – in the periphery of the MAP-it map – could act as levers to develop concentric circles of population towards the over-secured Parliament and its Esplanade. Above all, there is a need for places where meeting and exchange can emerge organically. The Leopold Park and in particular the abandoned site at the foot of the Mediaeval Eggevoort tower could play a central role in this regard.
New ways to integrate the fragmented neighbourhood, to remove barriers and to create new flows of people are also mentioned. Sign-posting of the entrances to the park could be improved, local activities could be better promoted and the relationships between different groups of people and places could be developed further. The windows of empty shops on the Chaussée de Wavre could play a part in this, or sign-posting could be re-considered altogether. The project-ideas and meeting of local actors as part of the MAP-it sessions are already a first step in this direction.
Extensive report on: http://www.map-it.be/mapping-reports/mapping-brussels-urban-platform

2
MAP-it
TOOLKIT FOR DISCUSSION AND IDEAS
MAP-it provides a number of tools to facilitate discussions and to visualise interacting powers and preferences. The aim of the workshops is to generate new insights and initiatives by means of a participatory thought process.
The toolkit or MAP-(k)it contains:
– a scenario with a central question, tasks and a timeline: this is what the moderator refers to for the course of the discussion,
– a (re-designable) background map: this provides participants with a clear view of the social context they are mapping,
– sticker sheets with icons and empty fields: allowing participants to add their own analyses, comments and ideas to the background map.
The interactive, adaptable toolkit-parts, the timed scenario and the visual character of the MAP-it process help to create a new and collaborative language. This allows dialogue and even collaboration among participants with different backgrounds and diverging opinions. 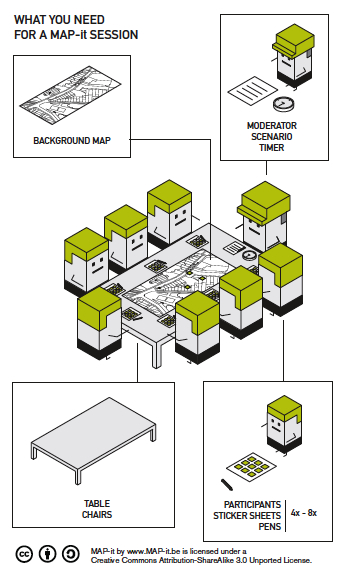 [EN]
We're building a ceramic model of the neighbourhood. Decide with us wich shape it should take - in only 8 minutes!

About P U M